By Dave Claes (as told by Richard Claes)

They purchased a brand new 1937 Ford and rented a teardrop trailer for $1.00/day from a man who lived near Mt. Gilead. 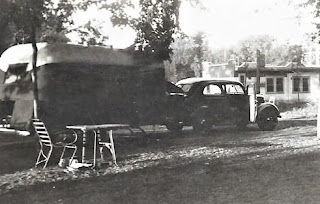 The trip started out by going through Chicago, Wisconsin (Janesville for some reason seemed like a nice place they passed through), Minnesota, Mount Rushmore, which had not been completed, and on into the Bad Lands, where they camped a few nights.  From there, it was on to Montana, Idaho, and, finally, the Columbia River Basin in Oregon, where they visited some of Blanche’s family.

They then took a left down Highway 101 where they visited the giant Redwoods and Sequoias and drove through a tree, a highlight for the kids.

Then it was on to San Francisco where they spent five days at the World’s Fair.  Richard remembers that they asked a “local” how to get to the fair and they were directed to “take the bridge and turn left in the middle”, and the directions we correct.  While at the Fair, they met Tom Mix.

They then continued down 101 to Los Angeles where the highlight was visiting another of Blanche’s relatives who was staying at the Aimee Semple McPherson’s temple.  Aimee was a well-known faith healer.  Richard remembers she wore a white robe and carried a white Bible.

Now it was time to start heading back east, where they visited Hoover Dam, which had just been completed in March of 1936.  Passing through New Mexico, seeing the Navaho people was of interest to the children.


The next stop was Tulsa, which Richard remembers as being very beautiful.  While in Oklahoma, they visited Will Rogers' home.  Will had died the year before in a plane crash in Alaska.

The rest of the trip was uneventful.

(I was sent this story & photos via email and I wanted to post it to preserve this moment. Richard Claes is my great Uncle. My grandfather Howard Claes is the one in the striped shirt in the middle of the first dinosaur photo.)
Posted by Sean Claes on Thursday, March 26, 2020