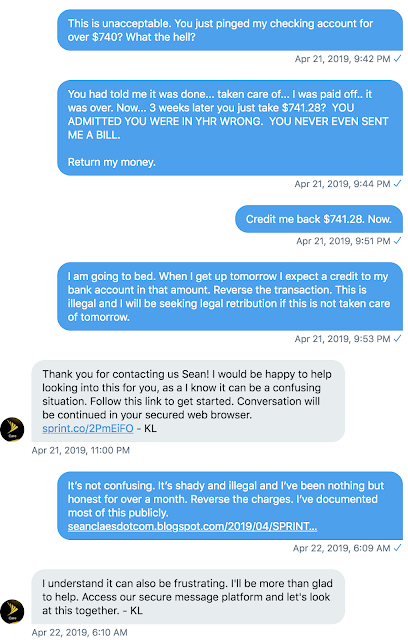 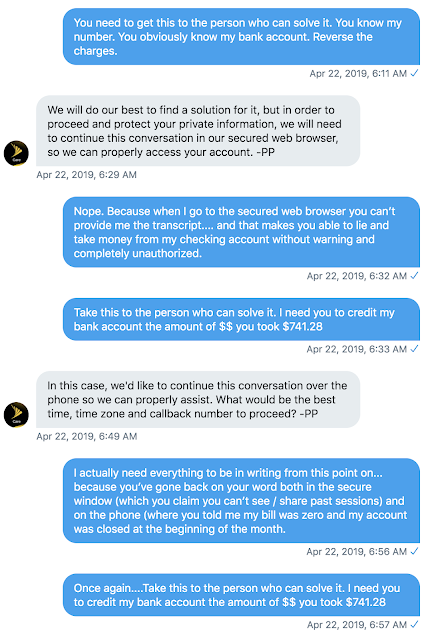 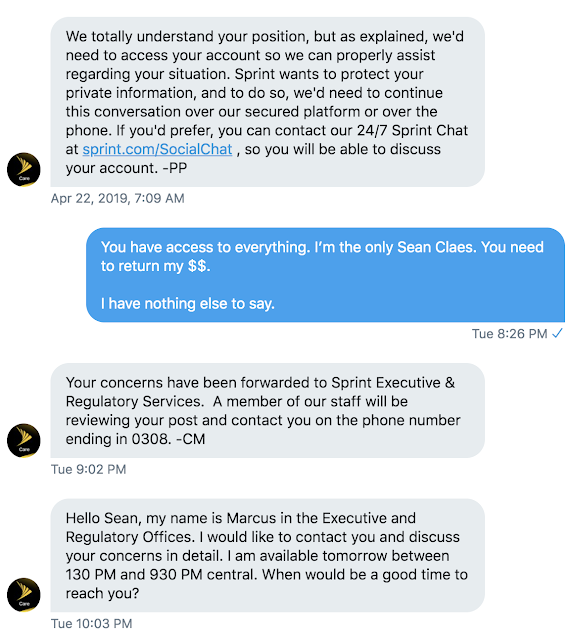 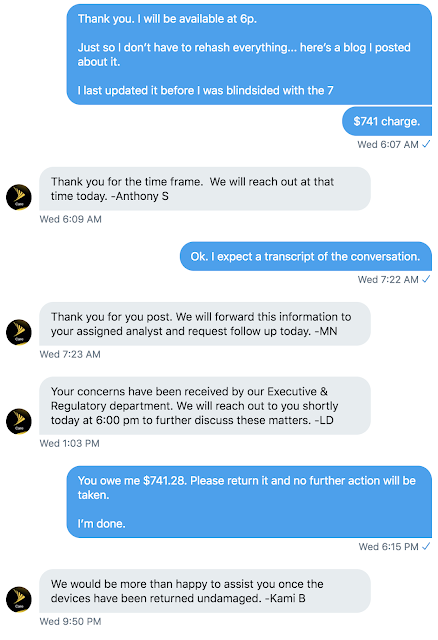 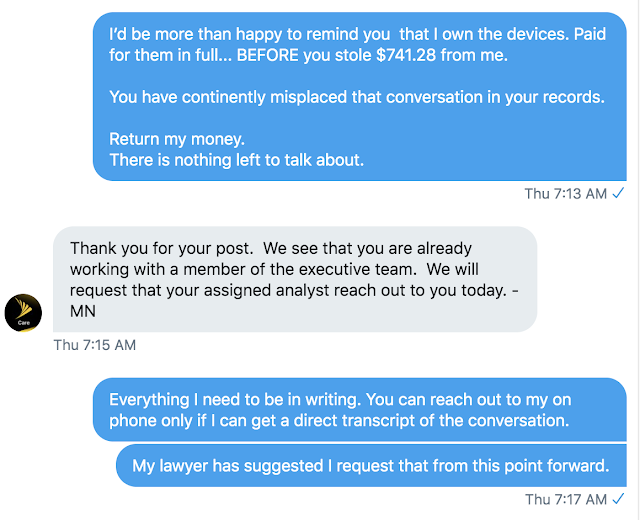 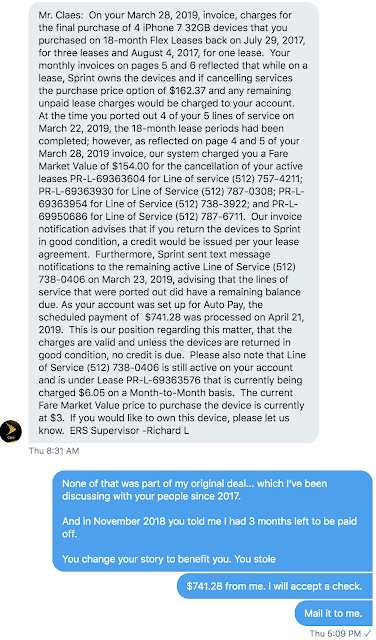 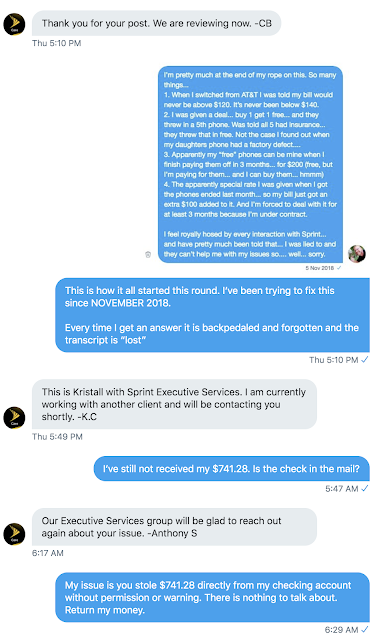 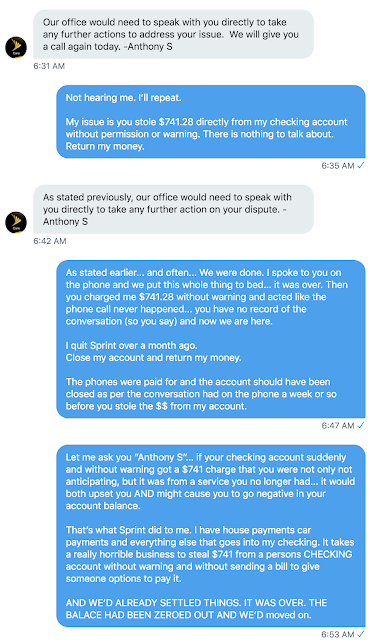 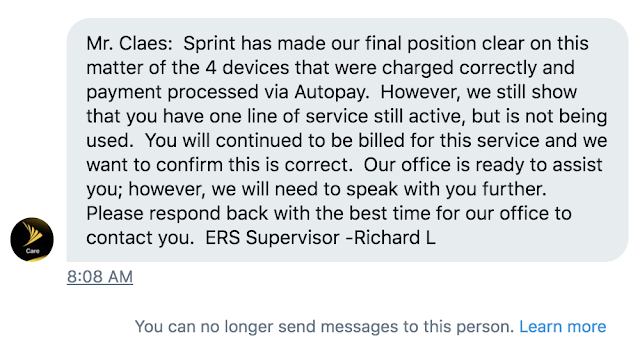 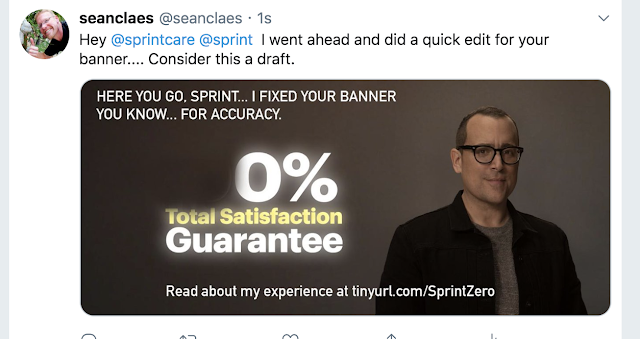 Sprint - Why Can't I Quit You? (A chronicle of trying to get Sprint to unlock my paid-off phones AFTER I left them for Cricket)

Two years ago I got a great deal at the Sprint Store at Barton Creek Square Mall in Austin. Actually... I (foolishly) replied to a message in my neighborhood's message board in Kyle posted by a gentleman who worked at the Sprint Store. I wish I'd saved THOSE messages because the amazing and blatant lies he promised me have been my worst cell-phone nightmare.

I was paying about $160/m on another carrier and my plan was up... I was actively looking for a new plan. So I reached out to this guy. I told him I wanted a plan with 4 phones for under $120/month.. unlimited text, calling & data.

He said he couldn't do that, but he said he had a deal where we buy one iPhone7 and get another free... and the unlimited text/calling/data plan for the 4 phones would be easy to have for under $140/month.

So.. I went down to the store... a kiosk in the middle of the mall... and got to business. It was great... 2 free phones with the purchase of 2 phones... wrapped into the contract... with insurance/warranty... for under $140. Boom. Everything I wanted. He even threw in a "moto" phone as a 5th phone just in case I wanted to have a hone phone at no extra charge.

So... then one of the phones has a SIM card reader issue. Took it back (about a month or three in.. I'm not sure when) and they replaced the phone with no issue. I asked them about the billing and they said it'd work itself out... not to worry. So I didn't.

Price continued at same.. nothing I could do about it. I figured I'd just wait it out until my time was up and the phones were paid for.... what can you do... right?

So about a
So... about a year in...MY phones messes up. I take it to the Sprint Store at South Park Meadows in Austin, they say they can't do anything about it in store... but they'll send it to Apple since it was a SIM card reader issue and that's a known issue for iPhone7s. Got it fixed. They were awesome

Just get that taken care of and about a month later, my oldest daughter's phone messes up. I take it to the same Sprint Store... and they said they couldn't help me because my phone was not under warranty and I didn't have insurance on it so it'd cost me for them to take a look at it.. or I could take it to the Apple Store and take a chance there to see if they'd fix it.

(Short story there... went to the Apple Store at Barton Creek Square Mall and they took care of it... no charge whew)

BUT... that caused me to call Sprint again... only to find out just MY phone had a insurance/warranty... So while on the phone with them I share what I was promised again... and got a whole bunch of "I'm sorry I can't do anything about that.. but I can save you a little bit if you give up some of the things you were promised at that price."

That last one was more than $120 over what my original promise was.

I called.
I was told that the plan I'd signed up for was 18 months... it was done and now I was paying for all 5 phones.. and I had 3 months left until everything was paid off. I said WHAT??!??

They said I could easily walk away from Sprint at any point now... just drop the phones off at a Sprint store and they'd close my account.
All of them I asked? Even the three free phones I was given?
Yup.. all of them.

It just gets better... doesn't it?

So.. I decided they've got me for 3 more months.. and it was "worth it" at this point to finalize the payments on the phones and then walk away. It was a bad relationship, and I feel I was wronged the entire time... but at least I'd walk away with something... I couldn't do the hell I went through without walking away with at least SOMETHING.

So.. I wait three months.
March 22.. I take this photo..... and send this to them via Instagram & Twitter. At this point I assumed all was done with Sprint... I could get my new phones online with Cricket and then once I was a safe distance away from Sprint I could break up with them and tell them to unlock my ALREADY BEEN OVERPAID FOR phones.... so I could use them with my new service.

Didn't quite work out that way... Actually.. as I write this I'm STILL chatting with them on the secure server.... (which apparently I can't request a transcript from even though each time I log onto the secure server I get a message saying they have all context from the previous conversation)

So... because I'm asked by them EVERY TIME how they can help and it takes 20 minutes (at least) to get them up to speed because they ask the same questions each time... I screen captured the last 17 days.

I call this exchange...


Here are the public tweets. 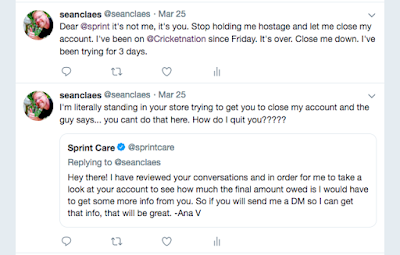 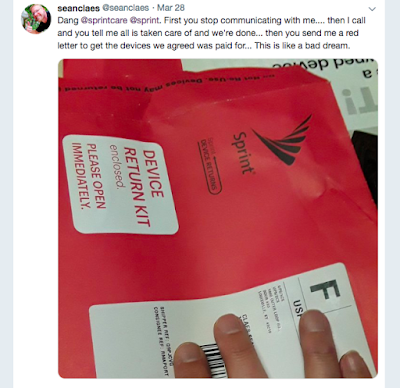 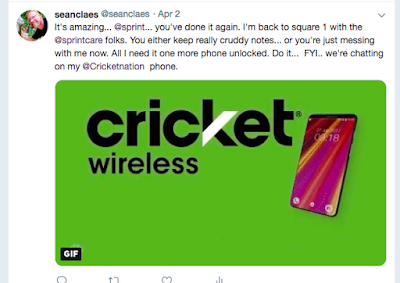 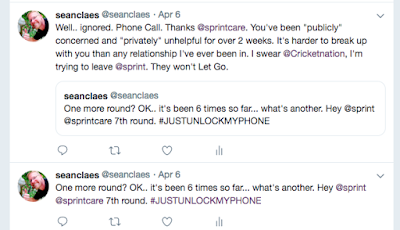 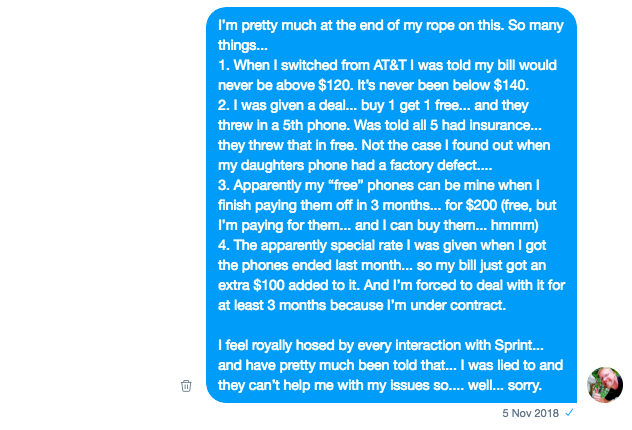 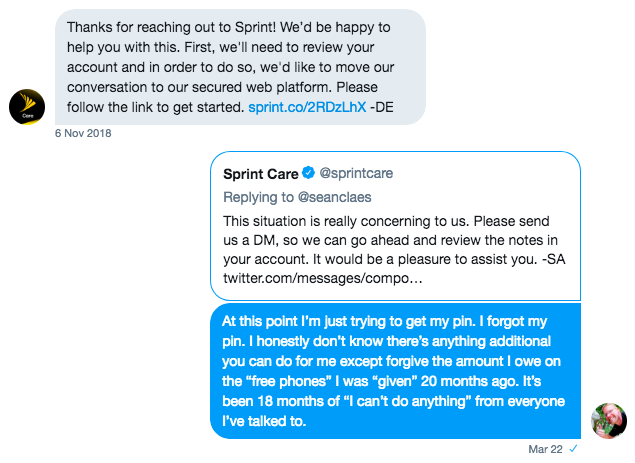 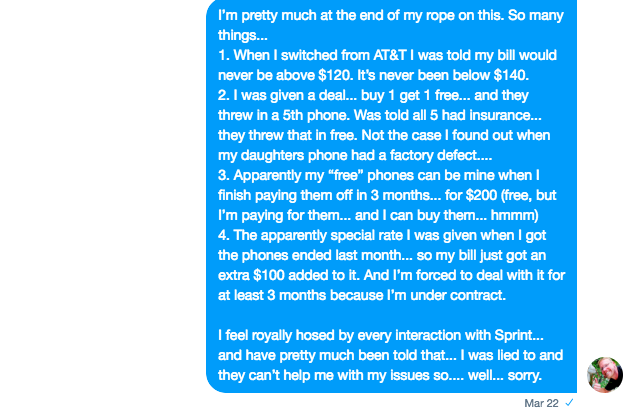 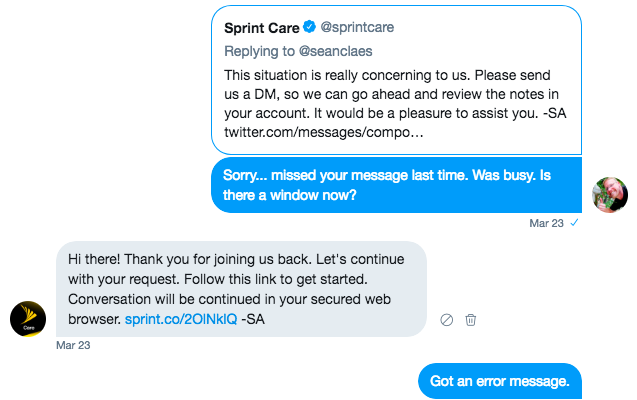 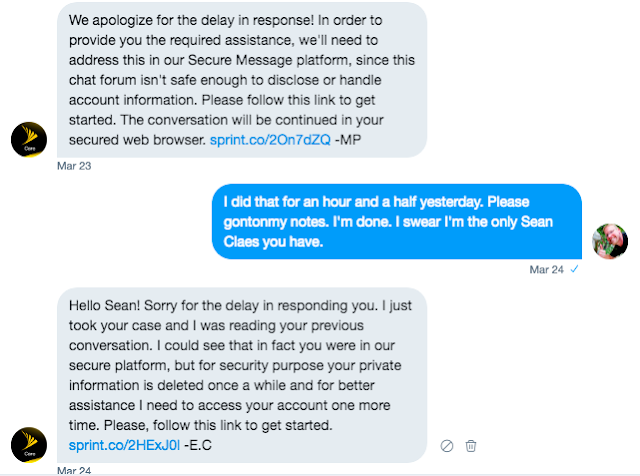 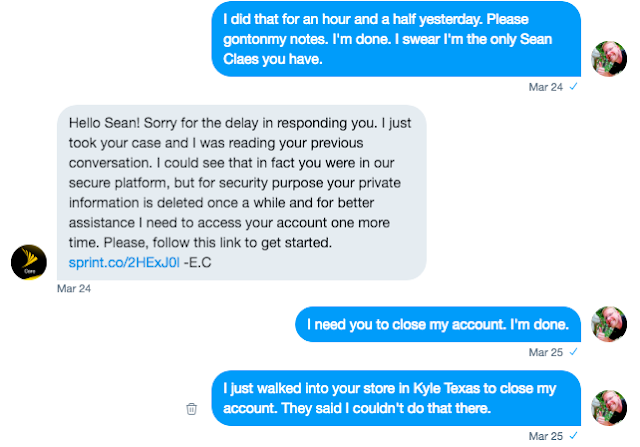 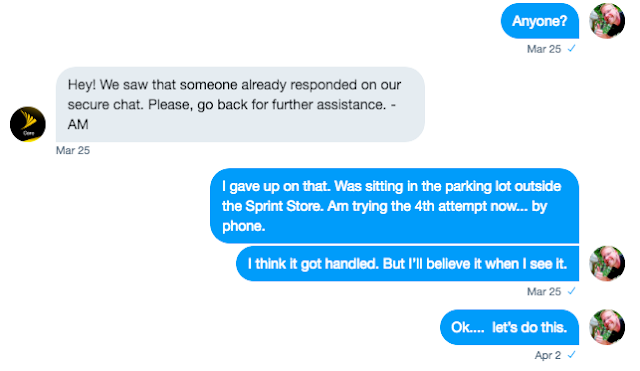 SO... here's the deal at this point.... March 25 I called them (from the parking lot of the Sprint Store where they said they couldn't actually help me close an account... they'll be happy to TAKE my money but they can't let me end my relationship with them.
Which... by the way... really smart Sprint... You never have to break up face-to-face. You can sleep better at night when you don't actually have to SEE the person who you've wronged...

OK.. back to the call...
I explained everything to them and they said they'd unlock my phones but it'd take 3-5 days. On April 2 I went ahead and started backing-up my iPhones so I could switch the SIM card out without losing any info. It worked for My phone, my wife's phone and my oldest kids phone... but my youngest kid's phone was still locked. Day 12 of the break-up. 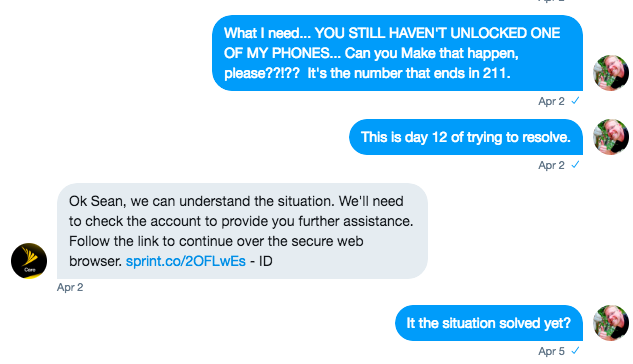 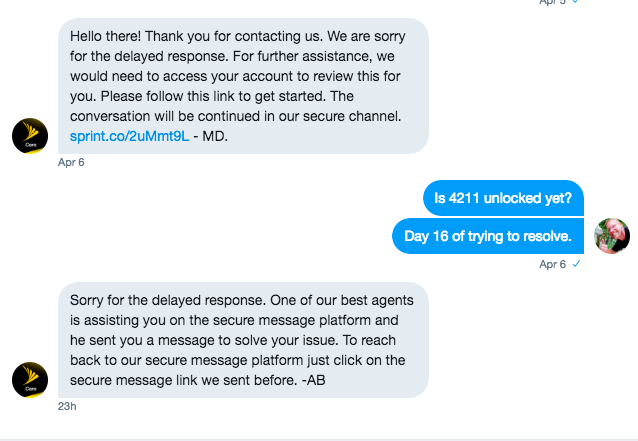 So... I called again yesterday. They didn't respond to my private message nor the secure message... nor the public tweet... until after I left.

Ok Sprint... I WILL screen shot everything. Thanks for the suggestion. 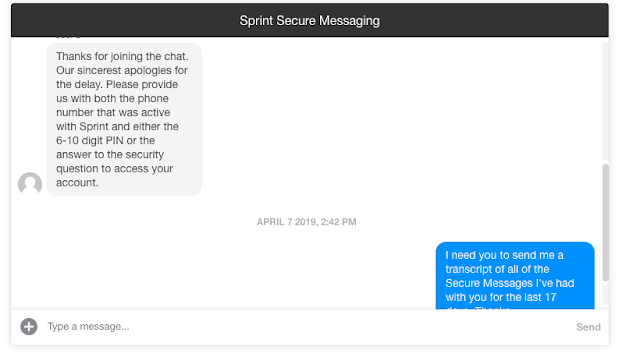 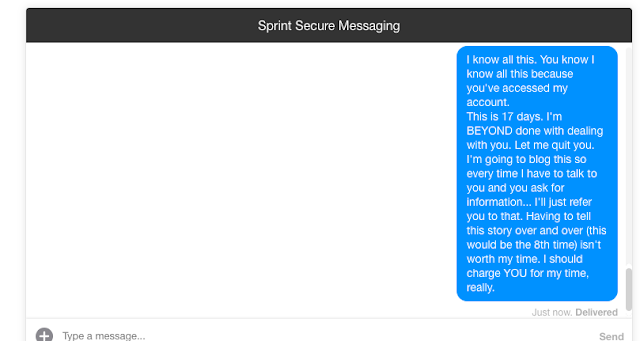 
UPDATE: April 21, 2019.
My final phone was unlocked.
There was zero communication to me about it. I don't know what finally made them do it... I never got an explanation. It was just unlocked.

Yes... it took from March 22 - April 21 to simply quit Sprint and take the 4 phones we bought (including the 2 "free" ones we ended up paying for) with us.