Phoenix Saga presents
THE WRATH OF KHAN - An AIA Fundraiser! 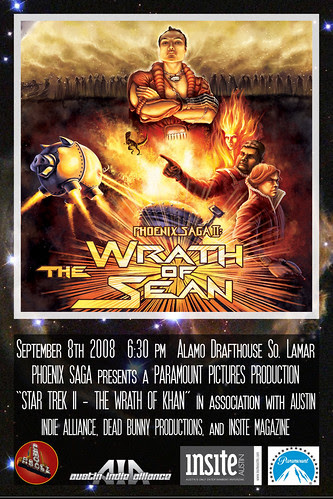 Independent Austin band Phoenix Saga is presenting a special screening of the sci-fi classic Star Trek II: The Wrath of Khan in conjunction with the special "director's cut" version of their sophomore release, Phoenix Saga II: The Wrath of Sean. Phoenix Saga is being sponsored by the Austin Indie Alliance (AIA), of which they are a member band, which is a non-profit organization made up of local bands and music fans to help independant artists survive in today's music industry. All the proceeds from the ticket sales will go towards funding the AIA, and all sales of Phoenix Saga merchandise will go directly to Phoenix Saga. All food sales will benefit the Alamo Drafthouse for catering the event. For more information about the Phoenix Saga or the AIA, please come talk to them before or after the show, and they'll be glad to tell you all you need to know.

Presented on the anniversary of the original series debut, this event features a listening of Phoenix Saga's album Phoenix Saga II: The Wrath of Sean before the feature film, and a viewing of the video commentary that the band recorded as part of the director's cut version of the album. In the video commentary the band got together, wore funny hats, and discussed each song on the album. The original version will be available for sale for $10, and the director's cut version will be available for $15, as it includes, in addition to the audio CD, the video commentary DVD, digital re-mastering of the original track list, 3 bonus tracks labeled as 'deleted scenes', and the lyrics to all the songs printed in the CD liner notes. General admission is $10, and as an added bonus Phoenix Saga is offering a special "friends of Phoenix Saga deluxe package" for $20. The deluxe package includes specialty seating by Orion Slave Girls, a signed limited edition Alamo Drafthouse event wall poster, an autographed 8X10 glossy photo of the band holding an 8X10 glossy autographed photo of Bruce Willis, a limited edition Phoenix Saga brand reuseable canvas bag with flaming pig logo, your choice of Phoenix Saga t-shirt, Phoenix Saga 1" button, entry into an exclusive raffle for Phoenix Saga merch, and many other delightful goodies to put in the bag!

All general admission ticket purchasers will be offered left over gift bag packages as supplies last for $15 each, all other Phoenix Saga merchandise will be available for sale at the regular prices in the theather, and as a special offer, ANYONE (male, female, young and old) who buys a bucket of beer from the drafhouse may present their receipt to an Orion Slave girl for a free kiss. Anyone who buys TWO buckets of beer is eligible for a kiss from a slave girl to another slave girl, so be sure to bring spending cash! For more information contact: phoenixsagaband@yahoo.com

Dr. Rouch is my doctor. On May 23, 2008 he sustained a head injury and has been hospitalized ever since. The community has gotten together and is holding a benefit to help pay for his Rehab. I received the below information in an e-mail. Thought I'd pass it along. You can read more about his accident and condition in this story from the Hays Free Press.
---
Dr. Danny Rouch sustained a severe head injury in May and remains hospitalized. This benefit is to raise funds needed to pay for the high cost of rehabilitation. All
funds raised will be used to defray medical/ rehab costs.

Please join us for BBQ, Music, Auction and Fellowship

Monetary donations may also be made directly at any Wells Fargo Bank to the
Dr. Daniel R. Rouch Benefit Donation Fund or online at www.DrRouch.net

Auction tems may also be donated.

Invited are all children (Kindergarten [potty trained] through the 5th grade) in the area. Parents, bring your children, bring their friends, and come ready for an amazing time as we explore God's Big Backyard! Call 512-268-2331 for more details.

Thank you and God Bless!

Kyle United Methodist Church invites you to regular Sunday services at 8:30 and 11:00a.m. and holds dinner and a bible study Wednesdays at 6:00p.m. Pastor: Harold Dailey
Posted by Sean Claes on Thursday, August 07, 2008 No comments: