A Sense Of Entitlement

NOTES FROM THE CUBICLE
A Sense Of Entitlement


How can you be angry about something that wasn’t yours to begin with? I’m starting to understand why some people just don’t believe in giving gifts (monetary or otherwise). People seem to take offense at gifts… or the fact that they don’t receive a gift that someone else gets. So, because they can’t give to everyone, they don’t give at all.

Some folks don’t understand… if someone gives you a gift, it is just that - a gift. It doesn’t matter whether it is a pencil or a quarter of a million dollars. It may be a free lunch. It may be a CD. It may be two tickets to a Spurs game. It may be a beer. If it wasn’t something that you worked towards or had an agreement on receiving… it’s a gift and the amount is the sole decision of the gift-giver.

If a friend or co-worker receives a gift, can’t you just be happy for them instead of judging their worthiness? It wasn’t your gift to give. It wasn’t their intention to get something that wasn’t offered you. They are just a person who happened to be the recipient. The gift-giver didn’t mean to piss you off by not giving you the same thing. If he did, that’s a bribe or power-play… not a gift.

I kind of feel the same way with tips at a restaurant. Tips are for good service. People are expected to tip 20% of the bill for good service. That’s a suggestion, not a rule. Now, before I get into this too much…I’ve waited tables. I know. I used to make $2.13 an hour + tips…so I’ve been there. I think if tips are expected income… they should be automatically added to the bill. Not just for parties of 6 and up. But, to all bills. Or, pay minimum wage to servers and don’t allow tipping.

I think all of the waiters and waitresses just balked at that. Why? Because many times, people tip way above the percentage that is suggested and above minimum wage. It’s all up to the diner’s discression. But… to be fair to waiters… 20% is the agreed upon standard for good service so maybe that should be the rule. Take the guesswork out of it.

To be honest, I think that’s a horrible idea. But, I also think it sucks to be a diner who had bad service, who didn’t tip the “suggested amount” and be cursed by the waiter. I was actually chased out of a restaurant once in San Marcos, Texas for not tipping a crappy waitress. She guilted my friend into giving her a tip. I’ve never been back to that place… and I really liked the food there too. Damnit.

In the same thought…how can someone be so down on people who hold signs on the corner asking for money? “Oh, they’ll take that cash and buy alcohol or drugs.” You know... they might. They might just take that cash and turn it into liquor… but they might also use the cash to feed their family. They may get a bus ticket to return to a long lost love. They may buy a cheeseburger. And yes… they might get high.

While at church last Sunday we talked a little about this. One member shared her perspective. “If they use the money for drugs, and that allows them to live another day, maybe something will happen in that day to bring them closer to God and they may make a life-changing decision.” I thought that was pretty profound.

But, my point is, if I am going to give you something… my say in what is done with my gift ends when it is given. If it makes a difference, if it doesn’t… that is not my concern. If I am to get anything in return, again, not my intention. It’s a gift. Not a free gift with certain expectations.

And, please don’t have a sense of entitlement. Don’t think that you deserve anything above what you have worked towards and earned. If talking about a job, I’m not talking about earning an office with a window view. That is a perk. You are compensated for doing a job. Your reward for doing a good job is the fact that they keep paying you… perhaps you get insurance… perhaps a vacation… the things that are detailed out in your job description that you agreed to when you took a job.

If you get a bonus, it’s just that, a bonus. The amount shouldn’t matter. It’s unexpected money. If your co-worker gets a bonus and you don’t, be happy for them. Don’t get pissy and think “I should have gotten that money.” It wasn’t yours to give. It wasn’t theirs to demand. It was a gift.

You work for what you get, and you have what you earned. Anything above that is a bonus, a lagniappe, a gift… and should be seen as such. If people would just understand that, there would be a lot less anger in the world.

DO512.com is a great tool to promote shows and network around. If you're not aware of it... you should be. The basis is... you can post all of your band information and/or show information and it creates a page for you complete with a linkable, repostable "poster" of the image you uploaded or the list of the bands that are going to be there. Now.. it gets put in the hands of the "people" next... as folks who are members of do512 can click "I like it" to any show... and the more votes a show gets, the more likely it'll rise to the top of the day's search.. and/or be included in the end of the week's "Top Picks" that is e-mailed out to the list of do512'ers.

INsite Magazine, has teamed up with DO512 and they are working together to produce the listings* that run in the magazine. They are also using do512 for the promotion of their INsite Nights. Here's the next 4 INsite Night links... you'll see examples of both with poster and without. If you are a do512 member, please click "I Like It" on these. It would rock.

INsite Night - Point of Contact, Under the Gun, Hazard of the Industry and Unnamed Project for Revenge

INsite Night - The Banner Year, She Craves, 6 Pack Deep, Litany For The Departed

*Deadline for inclusion of listings in INsite is always the 21st of the month for the next month. So... use do512 for promoting your gigs... it's easy... and a pretty cool tool... and you may end up doubling your promotional efforts by ending up in INsite.
Posted by Sean Claes on Friday, July 11, 2008 No comments: 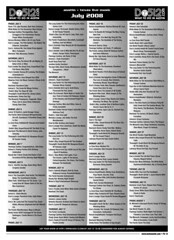 July INsite Page 13
Originally uploaded by seanclaes
This is from INsite Magazine.
http://www.insiteaustin.com