(CBS) Menu Foods is recalling dog food sold under 50 brands and cat food sold under 40 brands. The food was distributed throughout the United States, Canada and Mexico by major retailers such as Wal-Mart, Kroger and Safeway.

The recall is limited to “cuts and gravy” style pet food that was sold in cans and pouches.

A complete list of the recalled products along with product codes, descriptions and production dates is available from the Menu Foods Web site.

The recalled brands are:

"What makes this recall so scary is it involves so many brands: 50 dog foods and 40 cat foods."
The Early Show veterinarian Dr. Debbye Turner

WHAT DO YOU THINK?


(CBS/AP) For owner Elizabeth Krottinger, it's been a difficult week: All five of her dogs have been sickened.

Menu Foods, Canadian company based outside Toronto that produces pet food, said Saturday it was recalling dog food sold throughout North America under 50 brands and cat food sold under 40 brands including Iams, Nutro and Eukanuba. The food was distributed by major retailers such as Wal-Mart, Kroger and Safeway.

An unknown number of cats and dogs had suffered kidney failure and about 10 died after eating the affected pet food, the company said.

Two other companies — Nestle Purina PetCare Co. and Hill's Pet Nutrition Inc. — said Saturday that as a precaution they were voluntarily recalling some products made by Menu Foods.

Many stores that sold the affected brands frantically pulled packages off shelves.
Check the list

"The vet told us to buy her her favorite food, but I'm going to call the vet right now," Grzybowski said.

Ron Finegold of Boynton Beach, Fla., said he noticed about a week or so ago that his family's 3-year-old cat — who was regularly fed a variety of Iams cat food — had stopped eating and did not appear well. He quickly took the animal to the veterinarian, who determined she was in renal failure.

He said he heard about the recall on the radio Friday night. He checked his trash, and found out he had given the cat some of the affected food.

"That's when I realized (the illness) had to be related," Finegold said. "She won't be eating that stuff anymore."

A complete list of the recalled products along with product codes, descriptions and production dates was available from the Menu Foods Web site. The company also designated two phone numbers that pet owners could call for information — (866) 463-6738 and (866) 895-2708.

Menu Foods' chief executive and president Paul Henderson told the Associated Press on Friday that the company was still trying to figure out what happened.

He said that the company had received an undisclosed number of owner complaints that dogs and cats were vomiting and suffering kidney failure after eating its products. He estimated that the recall would cost the company, which is mostly owned by the Menu Foods Income Fund, an estimated $26 million to $34 million.

The recall involves all the "cuts and gravy" wet style dog and cat food produced at Menu's Emporia, Kansas, facility between Dec. 3, 2006 and March 6, 2007, reports CBS News' The Early Show veterinarian Dr. Debbye Turner. "What makes this recall so scary is it involves so many brands: 50 dog foods and 40 cat foods."

The company said it makes pet food for 17 of the top 20 North American retailers. It is also a contract manufacturer for the top branded pet food companies, including Procter & Gamble Co.

Sarah Tuite, a company spokeswoman, has said the recalled products were made using wheat gluten purchased from a new supplier, which has since been dropped for another source. Wheat gluten is a source of protein.

Food and Drug Administration spokeswoman Julie Zawisza said it is still too early to determine what could have affected the food. Zawisza added that even if wheat gluten is the source "it doesn't necessarily mean the wheat gluten per se. It could be another substance associated with the wheat gluten."

The recall covers the company's "cuts and gravy" style food, which consists of chunks of meat in gravy, sold in cans and small foil pouches from Dec. 3 to March 6.

In Omaha, Neb., Susan Balvanz said she sometimes feeds her five cats packets of sliced meat and gravy sold by Nutro Products, one of the brands affected.

"I've done so much research on pet food. It didn't surprise me but it scared me all the same," said Balvanz.

She said her 9-year-old cat, Boots, was especially fond of the food but seemed to have lost its appetite in the last few days.

"We've had a lot of calls," Carlson said, although none of his patients were sick.

© MMVII, CBS Interactive Inc. All Rights Reserved. This material may not be published, broadcast, rewritten, or redistributed. The Associated Press contributed to this report.

Follow this link to a bunch of free shows this week (downloads a PDF).
Thanks New Music Tipsheet.

So... if you know of any other free shows... list them below.

Of course... don't forget to check out the March issue of INsite... tons of free show information in there.

I am now officially up to date on my Website.

March 2007 Letter From The Editor

In the 27 months I’ve been the Managing Editor of INsite Magazine, I have never taken the Letter From The Editor spot to step on my soapbox. I always thought that was entirely self-serving and petty. So, please know that as you read on.

I have been one of SXSW’s biggest cheerleaders in the last few years. If there was someone saying something negative about the event, I always replied with something like “as soon as people stop lining up around the block to purchase a wristband, maybe they’ll consider a change” or “If I was running a festival that was THAT big I’d do the same thing.” I’m done being a supporter. Simply because, it seems to me they have forgotten where they came from.

After doing my best to showcase the best coming to town for the last two years, this year INsite has decided to largely ignore the event. Seems after all of the hard work and dedication we’ve put into promoting this event, we were treated like we weren’t allowed at the same water fountain. So, let the other magazines suck that teat. No offense.

In reality, this festival is working on borrowed time. Just like MySpace, YouTube and iTunes are hurting the music sales industry, technological advances like Flapdaddy.com and Culture Catch (which you can read about in this month’s issue) will make this label and publicist frat party an antique soon enough.

People can now see the next big thing from their home. They don’t have to wait until the band comes to their town… and definitely they won’t have to spend a lot of money in Austin, Texas to see a bunch of bands who are spending a lot of money in order to spend 30 minutes to an hour playing in front of a studio rep and 5 people who’d rather be somewhere else.

Now, as a music fan, I do recommend you go out and do all you can to have a good time. It doesn’t have to cost you much at all. There are plenty of free events. The 8th Annual Heart of Texas Quadruple Bypass Festival at Wave, Spill, Treasure Island and Fuel (texasrockfest.com), 7th Annual Invasion of the GoGirls at Trophy’s (gogirlsmusic.com), 4th Annual Austin Indie Alliance March Music Madness at Dizzy Rooster (austinindiealliance.com) are just three. Pop into any search engine and you’ll likely find more. Hell, just head to the party sans the bracelet and the only things you’re going to miss are the lines. Heck, even the MusicGorilla.com showcase at Nuno’s Upstairs is only $3.

Louis Black said in the interview we decided not to run in this issue (it’s on our MySpace and FlapDaddy as an INsite Extra – myspace/insiteaustin, flapdaddy.com/insiteaustinDOTcom):
“If you go to Park City the week after Sundance [Film Festival], it’s just a ski resort. You go the weeks before Sundance it’s just a ski resort. Being in Toronto at the Toronto Film Festival, it’s a great community and a great film community – but it’s not the same great community it is during the film festival. You come to Austin any week of the year, any day of the year, a lot of what makes SXSW work is going on just on a small proportion.”

That’s the thing. Austin is awesome the other 51 weeks out of the year. It’s not a city you should come in, transform into a blood-letting socialite scene for a week and leave and think that it will be the same. You’ve become the elephant in the room nobody wants to acknowledge. You became the problem and not the solution.

I applaud the bands who are playing this year. We included some mentions of bands playing in town during the third week… including some playing the “big one.” I included them to be fair to the artists and local club owners who are participating. At the end of the day it’s all about promoting good music and musicians who deserve to be heard in Austin. You just can’t put a price tag on that.

I know I haven’t. Thanks for reading.

Next month I’ll actually write a letter from the editor. Big things are happening in April… INsite will be putting out a Compilation CD at a live show at Stubb’s on April 21. Details next month.

p.s. The New Music TipSheet has released their "Free List" of shows during that 3rd week in March.
http://www.newmusictipsheet.com/sxswpartylist2007.pdf

Dos Equis Party
If you're over 21....You are invited! Just send in the RSVP. Really! (I'm the Managing Editor of INsite.) 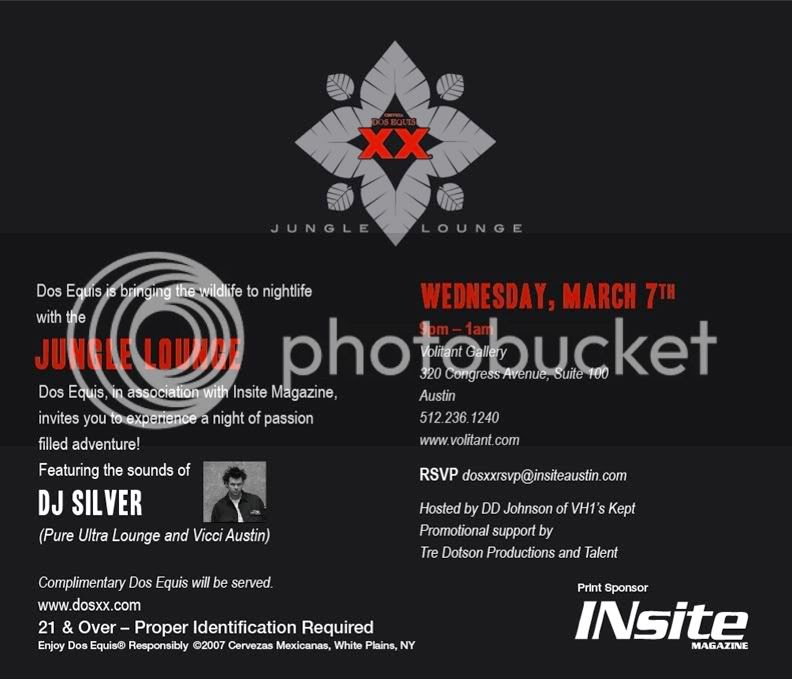 Austin-based bands Redefining the Moment and The Banner Year have created a showcase for local Austin punk bands and branded it ATX Punk: Down to the Wire. This is a local grassroots effort between the bands and managers of the Dirty Dog bar to surge a revival of a punk rock scene in the Austin area.

"We have begun to realize the ever-changing scenery in the Austin music scene and want to take the opportunity to shine some light on a genre that usually gets swept under by the surge of indie-pop bands," said Grant Irvin, guitarist for Redefining the Moment. "We hope that this ever-growing showcase will continue to establish itself in the Austin roots and build a strong following for punk music fans."

ATX Punk: Down to the Wire was started with the concept of drawing in large amounts of street traffic by purchasing kegs of beer that patrons can partake in after purchasing a wristband for $5. After much success with this during the first showcase, the bands have chosen to repeat this gesture for all future ATX Punk showcases.

The upcoming showcase on Friday March 2nd at the Dirty Dog bar features Hazard of the Industry at 9:30pm, Redefining the Moment at 10:45pm, and The Banner Year at 12:00am. Wristbands are available for pre-purchase from RTM's and TBY's websites and myspace accounts, and will be sold at the door. 18+ patrons will also be welcomed in for a $5 cover.

http://www.myspace.com/redefiningthemoment
Posted by Sean Claes on Friday, March 02, 2007 No comments: