My New Favorite Shirt.. I've yet to buy

This is my new favorite shirt... it's by Austin designer/artist Will Heron. I've not bought it yet... but my daughter wore one of his other designs yesterday... and reminded me to take a new look at his stuff.

Thanks Will.. your stuff always makes me smile.

Dreams - An Thology of Wild Fiction

A few months ago, I attended a workshop at The Wizard Academy entitled Wild Fiction. The plan of the workshop was to get a number of writers in a room and teach them a few things about fiction writing. The bonus of the class was, at the end we all had the assignment to pen a short story of our own and submit it to be published. I decided I would submit an interview I had with Peter Drewson, the inventor of the Drewson Suitcase Television.

Well, Dreams - An Thology of Wild Fiction is now at press. From the Wizard Academy Press you can now pre-order the hardcover book which includes my story. It will be shipped the first week of December.

Back up Sean....Who did you write about?
I'm glad you asked.

In the 1960s, Peter Drewson, a door-to-door salesperson and struggling inventor, built one working suitcase television. It was his big chance at becoming a millionaire and known the world over. Of course, if you've never heard of him, you're not alone... most haven't. He was unable to sell his idea and as technology advanced the need for a television/suitcase combo was no longer needed.

The original Drewson Suitcase Television is thought to have been lost on March 23, 1974 in a barfire.

So... if you're looking for a good read this Christmas... Might I recommend Dreams - An Thology of Wild Fiction? If you ask.. I'm sure I can get one of the authors to sign a copy.


Authors?
The full list of Authors and additional information on the book can be found by clicking the cover of the book above or clicking here.

Posted by Sean Claes on Wednesday, September 24, 2008 No comments:

TO ALL THOSE IN AUSTIN TONIGHT....

Want to win an all-expense paid trip to the South Padre International Music Festival? Willie Nelson will be there, so will Ghostland Observatory. Or maybe you'd like to win a Shred Sixx wakesurf board, a Gibson guitar, or simply enjoy a nice little party with drink specials and live music from Twanguero? If so, stop by The Belmont at 6:30 p.m. on Thursday, it will all be there.
Posted by Sean Claes on Thursday, September 18, 2008 No comments:

It's time once again for the Claiborne Kyle Log House Fried Chicken Dinner!

What is the Claiborne Kyle Log House?
"In 1844 Claiborne and Lucy Kyle moved to Texas where they built this house in 1850, a massive log home overlooking the Blanco River built of cedar logs. The four pen linear dog trot house has four rooms, each about 16 feet square. The home has been restored and refurnished, and is listed on the National Register." - http://www.ohwy.com/tx/c/clkyloho.htm
Posted by Sean Claes on Monday, September 15, 2008 2 comments:

Inflamed Birthmark and The Flaming Lips

Yesterday was one of those days that reminded me I was a parent. Not that I forget that I have two amazing kiddos, but as things go... I like to concentrate on the positive things about parenting. Jamming with Marlee (4) to the Rockland Eagles, watching Harper (1) careen into people like one of the cars when we were at the Spicewood Demolition Derby, and the many kisses and hugs I receive each day.

But yesterday was one of those "hard" parenting days. Those who know Mar Mar are probably aware that she has had a bump on her leg since birth. We always referred to it as her "birthmark" and over the years we've had doctors look at it... and nobody seemed concerned about it. It would get bigger... and smaller... and sometimes hurt... but most times it wouldn't bother her at all.

We tried to have it removed about a year ago, but Mar Mar wasn't having any of it (the story goes that 3 nurses, 1 doctor and my wife couldn't hold her down), so it remained. Well, recently it grew to about the size of a nickle.. and became a shiny black/brown/gray. It was bothering her, so we decided it was time for it to be removed. The dermatologist that we'd visited before didn't have an immediate appointment available so my wife made an appointment at the new Vitalogy Skin Care in San Marcos for Mar Mar.

Very, Very impressed. We walked in and there was a really comfortable office space... big chairs, a table... only a couple magazines, and the best thing... FREE DRINKS AND SNACKS. OK... not the best thing.. but free stuff is way up there.

Actually... the best thing was the fact that the doctor, Dr. Eric Adelman was a goofy, goofy man. Which was extremely good for the 4 year old on the table who was amazingly afraid. He also did a fantastic job talking to me and Jodie outside the door when he explained what was going on.

Something that isn't the norm for doctors, it seems. Bedside manner. I understand it isn't something that you learn in med school. Well.. Dr. Adelman has it down. He's also a Mohs micrographic surgeon, for what that's worth (we certainly hope we never have to use that service...or you either).

He walked into the room, the conversation went something like this:

It went on like that for a few minutes. Mar Mar was really scared, but I'm so proud at how brave she was. The assistants were awesome too... talking about their kids and making sure Mar Mar was as comfortable as possible. She even got a doughnut and a lemonade (remember... free snacks). After the operation Mar Mar got to pick between pink or purple sticky-gauze stuff to put on her leg.

The "cutting" itself is another matter... there's about $.25 hole in her leg where the "birthmark" used to be.. and we've yet to unwrap the bandage to take a look. I guess we better call the office there to find out just how to treat it (something Jodie probably already has done... I write blogs.. she actually finds out information).

The time the doctor walked in and the operation was done was only about 30 minutes.

Oh...Another reason I decided to write this... well... when Dr. Adelman walked in, I thought it was Wayne Coyne, the lead singer of The Flaming Lips.

Let me give you a visual... The Flaming Lips photo is by

This is a photo I found on newstreamz.com of the grand opening of Vitalogy Skin Care from August 2008.
Can you find the Doctor I speak of?

So... thanks Dr. Adelman and the fine folks at Vitalogy Skin Care in San Marcos for making a very scary experience... not so scary.

We will hear back soon what the results of the birthmark's biopsy... so if you could do us a solid and say a few words of prayer for Marlee and us... it'd be appreciated.

Milt's BBQ in Kyle - Friday's is for Live Music 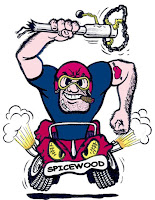 Thousands of spectators come out each year to witness dozens of drivers twist some metal as their cars crash and burn. Expect to see automobile carnage as vehicles tumble and flip and sometimes land wheels to the sky. You can also expect lots and lots of smiles from folks of all ages as this whole event is a whole lot of awesome.

Austin’s Radiant Plumbing will be participating for the third year. For 2008, they’re entering a 1973 Pontiac Catalina to put into the mix. “This is my third year going, and I can't express how much fun this event is,” Radiant Plumbing owner Brad Casebier said. “Make time to come. You will not be sorry.”

Entrance to the grounds is just $7 for adults and $5 for kids and all proceeds go to benefit the Spicewood Volunteer Fire Department equipment fund. The event is BYOB with food and drinks also available. For more information, or details on how to enter, visit http://www.spicewoodvfd.com/derby.htm