Disclaimer: I don’t normally review EPs. I believe it actually represents 1/2 of an album. I believe that if a band presses up an EP they should split the CD with another band and make it a full album… a split EP between 2 bands. This way you don’t waste CD space and you get the bonus of cross-marketing your band to the other band’s fans.

Anyhow… I’ll jump off my soapbox. This week, I’m reviewing 2 EPS… the seven-track Long Overdue by .A Good Rogering and the three-track Synchronize by Fulton Read


“I’m riding a one track mind through a long time going to nowhere.”
- “Born To Follow” 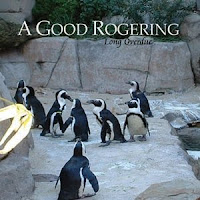 I first met Skunk Manhattan a few years back when he was playing with Austin’s Quartershackle (he still does). I never actually got his real name. Just “Skunk.” Of course the name was personified by his Mohawk w/blond stripe running down the middle. At that time I thought, he’d stand out in any band with that.
I ran into him again last March and he introduced me to his other band – A Good Rogering where Manhattan is the lead vocalist and guitarist.  In this outfit he is joined by bassist “Chef Bull R.D.”  who wears a plaid red oversized chef’s hat and a drummer that goes by the name Mr. Nub. So much for Skunk being the standout in the band.
Last week I got their debut CD Long Overdue in the mail. It’s going to be released this month. Coming in at just under 30 minutes, this seven-track debut album by A Good Rogering is really riding the cusp of EP vs. LP. It also begins with “Pilot” - a 40 second introduction to the band done in a 1970’s television theme-song manner. Pretty funny, and just what I was expecting from a band in costume.
When I didn’t expect was what came next. “Born To Follow” kicks in and it’s a fantastic Rob Zombie-meets-Metallica-meets Pantera rock anthem. The guitar-rock continues through “Never Miss” and “Salt & Rust” before slowing up for the 007-esque Bjork cover “Isobel.” Yes, they cover a Bork song. Well, I might ad. Once the Bjork-break is over the album ends on a brutal note with “Survey The Remains” and “Stop Scratching.”
You know.. sometimes a band has a gimmick to draw a crowd and can’t back it up with the music. I’ve got to say, A Good Rogering has something special. They may get your attention with the skunk stripe and chef hat, but once they have your attention, they’ll likely keep it with their talent. They can do in-your-face hard rock as well as pull off a technical and beautiful ballad. Heck.. I found a video on YouTube where they do a darn nice rendition of Digital Underground’s “Freaks of the Industry.”
Visit them online at agoodrogering.com to see where they play next. I know I’m going to try and catch them soon.

Week 22.5 - Fulton Read
“Could never understand the notion of seeing what you want but standing still.”
- “I Want It All” 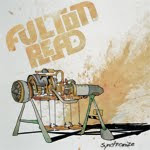 On January 31, Fulton Read released Synchronize as a free downloadable EP on their website fultonread.com. This piano-rock band has a sound that is best described as Elton John-meets-Coldplay-meets the college-age lyrical wisdom of early Live.
Led by the unique raspy voice of Anthony Erickson, Fulton Read subscribes to the idea that music should be free. The idea goes something like this: You give away your music = people share said music = more fans= more people at your show  = merch sales = you get more popular = you win. They also try and make their live shows an event. Past ideas included “Fulton Read in 3-D” where there was a 3-D light show accompanying the music and December’s Christmahannukwanza show where Erickson dressed up at Santa Claus and Austin’s Annie Ray had a photo booth.
But.. on to the music. Synchronize is only three songs, but it’s a pretty impressive effort. Plus, the fact that they are giving it away for free was reason enough for me to include it in my 52 Austin CD Releases in 52 Week project (as my 22.5 entry.)
“I Want It All” is a full-on epic production with horns  and “Synchronize” is about creating a new paradigm by everyone getting in line with each other.
The “single” from Synchronize seems to be “A Better Way.” It explores the question of what we’re missing in life. “There’s got to be a better way I know I’ve / Seen it linger in the haze of long nights / An image burned its way into my third eye / There’s got to be a better way to scale these heights.”
Synchronize is available for free from http://www.fultonread.com. Always going the extra mile, the band aligned the EP release with a creative challenge. They asked a plethora of people, artists, and fans to tag the word Synchronize somewhere on the release day. They’ll feature some of the entries on their site as well. Personally, I did some fridge art for it.
But, above all the hype, Fulton Read is a band that produces some really good and thought-provoking music. Do yourself a favor, check it out. You may discover a new band you’ll want to catch live.