(This is Week 23 of my 52 Austin CD Reviews in 52 Weeks Project. Follow the project there) 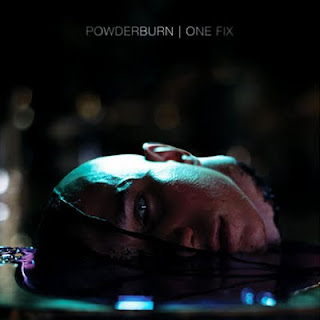 Powderburn
One Fix
If you’ve been around the hard rock / metal scene in Austin for a bit you’ve heard of or seen Powderburn. They’re a love/hate band. If you have an opinion about them it’s usually a pretty strong one. Kind of like Vallejo or Bob Schneider. For the record, I fall in the “love” category for all three. So, it makes sense that I choose Powderburn’s One Fix to review for the review that will be posted during Valentine’s Day.
Released late last year, Powderburn has really matured on this CD. It’s their first release since 2007’s Echoed In Red EP. One Fix has Powderburn coming off less like a metal club band and more like someone that could hold down a stage at bigger venues. They’ve got that Metallica-meets-Alice In Chains –meets- Breaking Benjamin sound that is too soft for Ozzfest but too hard for Austin City Limits Music Fest. Which is, perhaps, why they are still rocking the smaller clubs.
But don’t get me wrong, this band is sponsored by Jagermeister and does a show up right. This isn’t just four guys with instruments that stare at the ground. A Powderburn concert is an event with lights, shots, and many times scantily clad women giving away schwag.
But… on to the CD. One Fix is a good ten-track 45-minute ride full of sweet hard rock. The album kicks off with the five minute “Black Untold” that gets your blood pumping before going into the title track. “Slowly Divide” could be a Metallica ballad. “One By One” will have people in the crowd at a live show chanting.
My favorite track on One Fix is “Break Away” a jam that seems to be about a blackout and waking up not sure where you are. Growing up on the border, I can appreciate this song. “Then you wake up famished / and your friends have vanished / the girl speaks Spanish / and you can’t understand a thing.”
The epic seven minute “A Small Victory” ends the album nicely. I’d complain that they’ve only put out 4 albums in 10 years, but it seems Powderburn is doing things on their pace in order to turn in an album full of well structured and well thought out songs. As the old school saying goes “all killer and no filler.”
If you’d like to get the album, there are a few packages available on their MySpace Page and if you scroll down, you can get the whole thing as a download for free by signing up to their mailing list.
Powderburn is Ken Lockman (Vocals/Guitar), Eric Anthony (Lead Guitar), Greg Enkler (Bass), and Patrick Swift (Drums). Find out more about them on Facebook, Reverb Nation, or Twitter. You can also catch them live in Austin at Club Encore (611 Red River) on February 26.
Powderburn "One Fix" Album Short from Sneaky Giants on Vimeo.
Posted by Sean Claes on Thursday, February 11, 2010

Hello Sean in the Cubicle,

Apologies for a non-Powerburn related comment! I came across your blog through Networked Blogs. I'm now following you! If you'd like to check out my office comedy please see www.workforced.com. I'd be grateful if you wouldn't mind following me too if that's ok. I promise to make each post hilarious and no less! Wishing you the best.