Anyhow... here's the actual video. Lyrics are below.


I dont want you and I dont need you
Dont bother to resist, Ill beat you
Its not your fault that youre always wrong
The weak ones are there to justify the strong
The beautiful people, the beautiful people
Its all relative to the size of your steeple
You cant see the forest for the trees
You cant smell
Your own shit on your knees
Hey you, what do you see?
Something beautiful, something free?
Hey you, are you trying to be mean?
If you live with apes, man, its hard to be clean
Theres no time to discriminate,
Hate every motherfucker
Thats in your way
The worms will live in every host
Its hard to pick which one they eat most
The horrible people, the horrible people
Its as anatomic as the size of your steeple
Capitalism has made it this way,
Old-fashioned fascism
Will take it away
Posted by Sean Claes on Thursday, June 21, 2007 No comments:

It sounded good... in concept.

So, the other morning I was on my way to work and I had to stop and gas up the truck. Gas is up over $3 now so I thought, as long as I'm spending over $48 on gas, I deserve to have some breakfast. So, I wandered into the store to find something that was breakfasty. The problem with looking for breakfast at a gas station is, unless it's a fancy one (and this one was anything but fancy) you aren't going to find anything other than coffee and little chocolate do-nuts. So I wandered through the store, past the newspapers, bin of beer on ice (it was 7:15a.m. you know), and vaious jerkeys and chips looking for something that said breakfast to me. Having finding nothing, I took a look at the beverages. A breakfast drink.. that's what I'd get. That Starbucks ice coffee thing was like $27.00 so I browsed elsewhere until I found what looked like the best drink ever.

The Three Musketeers breakfast drink. PERFECT! I love 3 Musketeers, and I love breakfast. It's the best of both worlds. So I bought it. I paid for it and wandered out and jumped in my newly gassed up truck and headed to work. I shook up this bottle that I thought was filled with liquid genius and opened it up.

It was crunchy. I thought I'd thought I hadn't shaken it up enough.. so I closed it up and did it again. Nope... crunchy. It was like they took 1/2 the bottle and filled it with powdered Three Musketeers, 1/4 of it filled with powdered milk and 1/4 water... Crunchy liquid.

So, please be warned, if you buy this bottle... buy a pint of milk to dilute it into in order to make it drinkable.
I'll go ahead and skip the middle man and just buy a candy bar next time. It's not breakfasty... but hell.. it's edible.

I'm Lucky
I'll admit it. I'm the luckiest person I know. I'm not talking gambling. I suck at that. My wife can wipe the floor with me on those video-slot machines that used to be legal and were oh-so-fun. I'm talking about things like drawings and life in general. What made me think about this was the fact that a new HEB plus! opened in my neck of the woods and I was invited to the grand opening event (free food, mariachis, a full band, a mascot... who's NOT gonna want to go there?) and my name was one of the 6 names drawn to win a prize. I won 4th prize, a Rattan Wicker 4-piece outdoor furniture set worth $379.00. Awesome.

But that is just one in a long line of lucky wins I've had.
When I was three or four, I won the tricycle in the community Easter Egg Hunt in Coldwater, Michigan. I was told that I only picked one egg up and it happened to have the "golden ticket."

Not a winning, but it goes to luck. When I was in 2nd grade I fell from a tree and only broke my arm. I fell from the equivalent of the very top of a 2-story house. All I remember is "branches-brown-and-blue. What adds to the luck was the man mowing the grass right next to where I fell was a doctor.
When I was in my early 20s I won a trip to Acapulco in a radio "Summer of Winnings" in Laredo, Texas. It was one of those things where you win something like $10 worth of Burger King food and your name goes into the running for the big prize at the end of the summer. Well... somehow my name came up. I really only wanted the Playstation. I got the bonus plan.
When I moved to San Marcos, Texas to pursue my degree, my wife was the first person I met.
When I graduated college, I got a job at the Austin-American Statesman... then 6-months later was offered a job for $10k more a year to go into the dot-com world as a Copywriter and Internal Communications Specialist. I was downsized only to get a job offer on my last day of severance.
Anyone who knew me in my mid-to-late 20s can attest that the very fact I'm typing this message and not a statistic of misspent youth will agree that I'm lucky.
I'm just lucky. I hope it never runs out. The glass is always more than half-full. I've got to believe that.
I've been blessed with a wonderful wife, two fantastic little girls (3 and 8 weeks) and friends the world over.
I better run, I'll be lucky if I get to work on time now.
Posted by Sean Claes on Tuesday, June 12, 2007 No comments:

Just thinking about this... I was working at the Laredo Morning Times that faithful day in March 1993. Talk about a day when you didn't open your door for fear of being fired.

I recall Target actually sold "Home of the 300 Pound Worm" shirts. I wish I'd bought one.

The crappy thing about this is.. 2 really good people lost their jobs because of this.
----
UPDATE (3/19/2015): Jesus Manuel posted this image of the actual story as it appeared in the Laredo Morning Times on the "Remember When In Laredo Texas..." Facebook group. 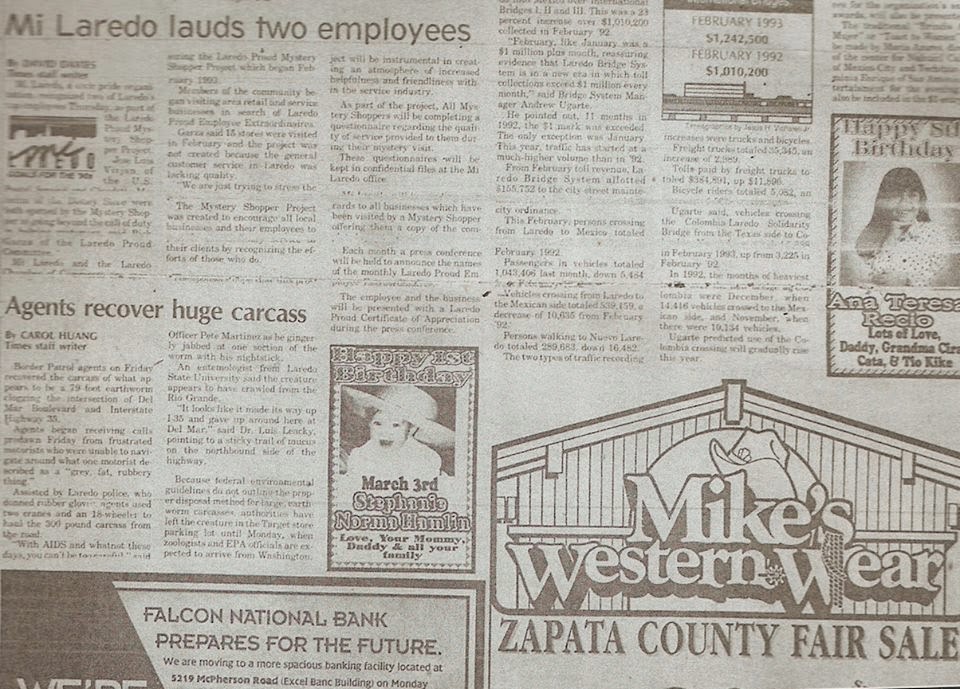 The Morning Times of Laredo, Texas published a story in March 1993 about a 300-lb, 79-foot earthworm that had townspeople rushing to the storage location to see the body. Unfortunately, the story was a hoax which cost the job of the reporter under whose byline the story appeared and caused the editor who approved the story to leave as well. The reporter, Carol Huang, is now working as a freelancer, but regrets not having worked harder to keep her job.

There were no aliens involved, just a dead 79-foot earthworm, but something of a "War of the Worlds' concern still gripped the border town of Laredo, Texas, in early March after the Morning Times reported the worm's appearance.

The 200-word story said that frustrated commuters called police that morning after being unable to drive around the 300-pound worm, described by one motorist as "a grey, fat, rubbery thing." A Laredo State University entomologist, Dr. Luis Leacky, pointed out a sticky trail of mucus along Interstate 35 and surmised that the mutant had emerged from the polluted Rio Grande. U.S. Border Patrol agents, assisted by Laredo police officers wearing rubber gloves, used two cranes and an 18-wheeler to remove the carcass, according to the paper.

That day, Bill Green, publisher of the Hearst-owned Morning Times, dismissed the reporter who wrote the tale. The editor who allowed it to see print also left the paper, although he won't say why. (The publisher would only say the two "no longer work here.") The next morning, Green signed a front page apology to readers on both sides of the border--as well as the Border Patrol, the Laredo Police department and Laredo State University, home of the fictitious Dr. Leacky.

Reporter Carol Huang, 27, says she dashed the story off as a joke after being put on hold during a phone interview. It wasn't the first time she had composed fake stories on her computer to amuse herself, she says. This time, however, she shared it with a newsroom colleague.

When it appeared a few days later on page 3A of the Morning Times under the headline, "Agents recover huge carcass' and her byline, Huang says she was stunned. "I knew right away I was in trouble."

Tom Sanchez, the news editor who signed off on the story and who now hosts a daily talk show on a local radio station, says it was printed "by accident" but wouldn't comment further or explain who had written the headline or placed Huang's name on the piece. Says Green, "I know this much: He had the story for 24 hours. He did not consult with the writer or another editor. It is inexplicable."

What caused many of the city's 130,000 residents to run to their cars was Huang's final paragraph. "Because federal environmental guidelines do not outline the proper disposal method for large, earthworm carcasses," she wrote, "authorities have left the creature in the Target store parking lot until Monday, when zoologists and EPA officials are expected to arrive from Washington."

Local law officers say they received hundreds of calls. A Texas A&M University scientist notified the Morning Times he was ready rush to the scene with a van loaded with technical equipment. At the parking lot, located across the street from Border Patrol offices, curiosity seekers arrived in droves. Says Alfonso Moreno, a Border Patrol spokesman, "There was a lot of commotion, cars going in and out of there, looking for the worm."

Jose Esqueda, the KGNS-TV chief photographer who drove to the lot in a station car to film traffic for a story on the hoax, soon found 15 cars following him. He says puzzled drivers would catch his eye and shrug, as if to say, "Where is it?" When Esqueda returned a few hours later, he found a batch of curious firefighters circling their truck ahead of what he describes as "a little worm" of tailgaters.

One Target employee says that people knocked on the store's windows even before it had opened "asking if we had [the worm] in the building." Huang, now freelancing and having second thoughts about whether she fought hard enough to keep her job, says the hubbub taught her a hard lesson about the power of the press. "I realized, definitely," she says, "that people read the newspaper and believe what they read."

Martinez, a Laredo native whose first journalism job was as a Morning Times proofreader in 1976, is a freelance writer based in Cambridge, Massachusetts.
Posted by Sean Claes on Monday, June 04, 2007 No comments: