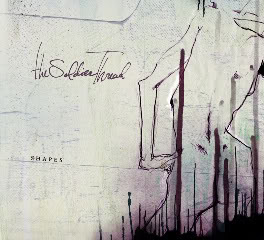 This week’s CD review comes from the files of “better late than never.” You see, Shapes was actually released in April and last I talked with The Soldier Thread it sounded like their next album was going to drop very soon.  But, ever since the band played an INsite Night at Antone’s a few months back, I’ve been digging this, their debut full length album, so here we are.

For those who have never heard this band, they’ve got a beautifully delicate sound that I’ve not really heard in an Austin band before. The songs are piano and viola driven and Patricia Lynn (vocals/viola) has the kind of voice that reminds me of Evanescence’s Amy Lee.  In fact, if you’re familiar with Evanescence, picture their sound but instead of coupling the dainty female voice with hard rock, it’s paired with the Austin indie sound. Justin McHugh plays some great keyboard and when he sings alongside Lynn it makes for a pretty fantastic pairing and some stunning music.

Shapes kicks off with the epic heart wrenching track “Run, Run” that sets the stage for the almost 80’s sounding (in a good way) “Cannons” and “Criminals.”   The viola comes to the forefront for the beautiful “Northeastern.” The keys of “Cherish Me” really stand out. “Rock and Roll” is the crawling ballad that completes the album. It seems like a fitting closer to Shapes and a pretty love song.

For me, the standout track on Shapes is “So In Love.”  Lynn and McHugh’s voices dance through the track as if they share a heartbeat. It’s a very simple song lyrically, but for some reason it’s the one that gets stuck in my head. “Make it look so clear / There’s more to be seen / You’re tearing down your walls / But you’re so so so in love.”

I recommend checking them out live sometime, they have been known to put a room in a trance.  I think they are actually in the studio right now…so you’ll have to wait a few months. I’m sure they will be ready with a new release in time for their SXSW showcase in March. Yes they got an invitation to the show.  In the meantime check them out on www.thesoldierthread.com