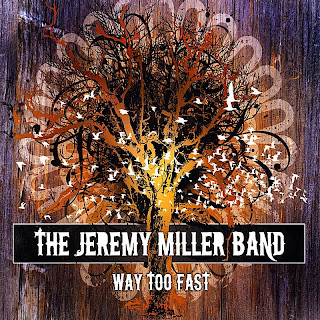 THE JEREMY MILLER BAND
WAY TOO FAST
Cut from the same cloth as Red Dirt rockers like Reckless Kelley and Cory Morrow, The Jeremy Miller Band comes out of the gate like seasoned veterans with Way Too Fast. It really is amazing to know this is their self-released freshman effort.

The tunes kick off with the driving title track. It’s a half-ballad, half-rocker that sets the pace and the theme. These are songs about losing, loving, and leaving. Typical country fodder, but these guys have a little different twist. Lyrically and musically this album is on par with the guys in the big leagues.

“Sorry” is a powerful ballad about the end of a relationship. The unapologetic “Life I Lead” is a snapshot into Miller’s world. “Little Bit” is a beautiful duet with Beverly Hensley.

The Chuck Berry infused rocker “No More” is a funny little ditty about being on the deserving end of the cold shoulder. With lyrics like “I probably never meant it when I said, your best girlfriend was better in bed. Baby don’t you love me no more?”

But to me the standout track on this album is the final one. “17 Wheels” is the story of a trucker who was a part of a horrific accident caused by a flat tire. “You can’t stop 17 wheels from rolling, when the 18th is on the ground”

I really dug this CD. There isn’t a song I don’t like between the 10 tracks. They’ve got that Red Dirt sound down well, Miller’s voice is just the right tinge of whiskey stained and his lyrics are framed within the country/rock/jam music played by guitarist Sonny Bihl and bassist Seth Tobin.


Take a listen to it for yourself at thejeremymillerband.com. You can also see where to catch them live from there as well.

Note: This CD review originally ran in the October 2009 issue of INsite Magazine. I'm in Boston right now with the family for Christmas.

Email ThisBlogThis!Share to TwitterShare to FacebookShare to Pinterest
Labels: The Jeremy Miller Band, Way Too Fast