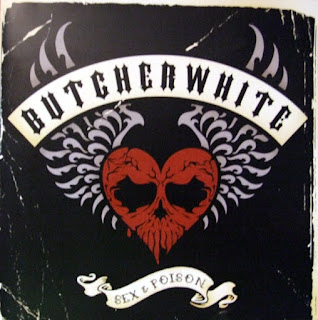 If you like your rock with chugga-chugga guitars or your metal with understandable lyrics you’ll get into Sex & Poison by Austin’s Butcherwhite. Their sound is that old school rock with a little punk thrown in for good measure…kind of like Social Distortion or The Offspring.

The eleven-song 45 minute CD kicks off with “Find A Way” which is a straight-up rocker about coming to terms with the rock and roll lifestyle choice. “Hittin’ The Jester” is both a nod to drummer Kique Garcia’s former band by the same name and to Black Sabbath. The closest thing to a “ballad” would be “Nothing Like My Baby” but it’s not your classic slow song. They take on the subject of suicide with “Why Do You Wanna Die.” There’s a really old-school Metallica feel to “Betrayed.” A Toadies “Possum Kingdom” like tale is told in “Something In The Water.”

The song that struck a chord with me on Sex & Poison is “Blood War.” Not sure if this is what Butcherwhite intended with the fist-in-the-air jam, but here’s my interpretation of what this song means. Ever been so angry at an adult family member that you are driven to physical violence but couldn’t bring yourself to it because you don’t hit family?


“Something isn’t making sense / punishment outweighs the offense. / Don’t allow the bar to crack / Don’t back down but don’t fight back. / I was always a fighter (x3) / But my arms are down.”


Yes, some of the themes are pretty dark and serious. They seem to take a positive spin on the subject though and that is what, to me, sets Sex & Poison apart from many of the hate-filled bands out there.

The album concludes with the all-out metal-begging-for-a-mosh-pit track “World Go Black.” Well it actually concludes with a great one-liner from Pulp Fiction but I’ll let you buy the album and hear that one for yourself.

Butcherwhite is Billy Perkins (vocals), Nill Ables (guitar), Garcia (drums) and Rob Hacker (bass). You can find out more about them on MySpace (http://www.myspace.com/butcherwhite). Come out and see them in Austin at an INsite Night on December 11 at Red Eyed Fly. You can click “I Like It” on Do512.com for your chance at Free Tickets. <---That's a link to it (FYI).

I didn’t find any videos of Butcherwhite on YouTube…so here’s a shot of me and lead singer Billy Perkins in 2007. This was after a show at The Parish Room… and the last time I saw them live. Looking forward to 12/11. And... here's a photo by Austin's "Photography By Maurice" of the band playing Headhunters this year. 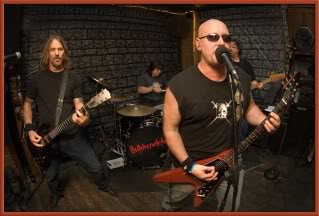 And... Billy Perkins is also a fantastic artist. Here's a couple of his posters... (Click the photo to see bigger)