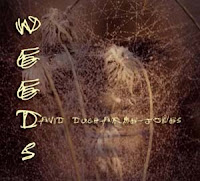 What do you get when you have extraordinary guitar chops, a home studio, and a desire to cut an album? For Austin’s David Ducharme-Jones, you get Weeds. You may recognize his name as one of the founding members of Austin’s Rainravens, but Weeds is much more than a solo-version of his former band.

Ducharme-Jones showcases a mastery of guitar, a good vocal performance, and a love for multiple genres with Weeds. This CD is kind of like putting all your favorite Funk, R&B, Blues, Americana, and country-rock CDs released between 1970 and 1990 on and hitting shuffle. He finds a way to mix some really nicely done original tracks with some lesser known but great covers.

Right off the bat, “Golden” separates his solo effort from his work with the Rainravens. The track boasts a 1970s wa-wa groove with an infectious chorus that will get stuck in your head all day when you hear it.

Then he changes gears and genres and brings out the full-tilt boogie blues of “Talk To Your Daughter.” Next up is the instrumental Joe Satriani-esque “Goodnight Roy B” then the funky horns of “Say What You Want.” This genre-jumping theme carries on throughout the forty-five minute 10-track album.

The Eagles-meets-Rolling Stones jam of “Left Undone” is a classic country-tinged rocker. If you are a Rainravens fan, this song was previously released in 2006 as part of the 2 Disc The Best of the Rainravens.

One of the standout tracks is the spot-on Tommy Bolin cover “Savannah Woman.” It’s got a sweet climbing dirty ballad feel to it. “Snow white and with desire / That vamp from the magazine. / Cold and distant as the moon / Why can't she burn like fire?”

Overall, Weeds is an entertaining laid-back jazzy blues album that had me tapping my toes to the beat on each listen. I look forward to catching him live soon.

Speaking of live, Ducharme-Jones is playing the Texas Book Festival at 11:00am on 10/31, then playing that evening at The Amsterdam. If you’re staying away from public places on Halloween, he’s also playing on November 6 at 8p.m. in Austin at the One 2 One bar. Check http://davidducharmejones.com/ for more information