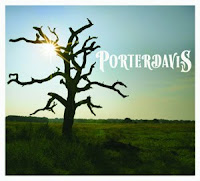 From the opening jam “Smack You Back” to the last groove of the Muddy Waters cover “Can’t Be Satisfied,” porterdavis’ self-titled 2009 release is forty-one minutes of fantastic harmonica-driven blues-infused roots music.

The three-piece band, consisting of Daniel Barrett (vocal/guitar), Mike Meadows (percussion) and Simon Wallace (harmonica), have created a sound that is both unique and familiar, full and simple, blues and rock, toe-tapping and meaningful. It’s a fine line, but they seem to dance it with style and grace.

If you’ve not figured it out yet, I’m really digging this release. In fact, I’ve been playing this CD so much that my five year-old daughter knows the words and sings along to the third song, “Jaynie.”

Then there’s the juxtaposition of the happy-go-lucky ”Sunshine.” It’s a fun little ditty that explains life in one verse: “I learned my legs are made for walking, learned my eyes are made to smile, learned my arms are made to hold you, learned that quiet times are wise.”

Favorites aside, there’s really not a bad song in the bunch. Weather it’s the realistic love song “That Way,” the anger-infused “Jack,” or the funky beat of “Take The Fall” they all are really strong songs. There’s even a ballad, “Carter’s Song” where Eliza Gilkyson does some beautiful guest vocals.

I’ve also had the chance to check these guys out live a few times and they are even more impressive in person than they are on this stellar release. The album was released on September 1 but they’ve got a couple of CD release shows coming up this weekend in Houston (Anderson Fair 10/2-3) and New Braunfels (Gruene Hall 10/4). If you can’t make those dates, check loveporterdavis.com for upcoming releases and to hear a few tracks.