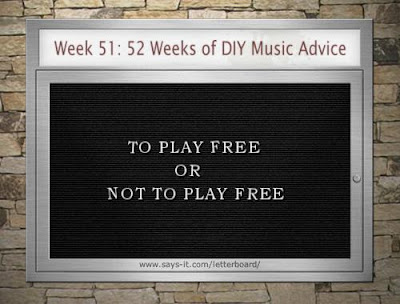 The first week of music in January in Austin, Texas has been known as “Free Week” for almost a decade. It started when Graham Williams (Transmission Entertainment/Fun Fun Fun Fest) was booking at Emo’s and was an attempt to get folks out to a bar during the cold weather in between college semesters.

From a marketing / bar standpoint, it’s a really good idea. And you know what? I’ll probably take a show or two in. There are a couple bands in town I’d like to see, but not enough to pay for them. Did I just write that? Ahem… I mean… well… I mean I’m a very, very cheap person. It’s true. I’ve often said that my family motto is “It’s All About The Free Stuff.”
Of course, I’m a 38 year-old father of two that lives in Kyle, Texas who happens to have been an entertainment writer for the last 15 years. I’m really not your average music fan.
So, I’ve put my thoughts to paper on a few questions you may have (and should have if you’re trying to advance your musical career). It’s too late to be booked for Free Week 2012… but if you’re playing it… or hoping to play it next year, this may be for you.

1. Does Free Week bring average music fans out?
There is definitely a buzz between the Red River/ 6th Street area during the first week in January. So, yes, there is a lot more people on the street this week because of the event, but they are all craving something free.
The question is, how do you get that average music fan* to see you during free week? Remember it’s not up to the club to promote you. YOU are in charge of getting butts into that club. There are going to be more than 15 clubs in Austin within a mile of each other with bands playing for free.

How are you doing getting people to your show? Did you use the social media? Did you poster up the area? Did you hand out hand-bills? Are you creating a buzz about your show? Did you e-mail media? Try to get on a radio show? Get some press on a local blog? Post your show on places like DO512.com  and Showlist Austin? In short… have you done ANYTHING to tell people about your show?
If not, you’re just playing to play… and that's OK... it shows you’re not serious about the progress of your band, and when you’re done playing your show you can go back to the garage and tinker like you enjoy doing. There's absolutely nothing wrong with that. But, I write this article for musicians who may want a little more out of their musical career.
2. Do you really gain any fans?
You get out what you put in. I’ve seen bands play Free Week that have their entire merch booth set up, I’ve seen others that didn’t have a thing for sale and still others who gave away their album. Remember, there’s a BUNCH of bands playing at the same time. Last year I jumped between 4 different bars. The only bands I remembered were the ones I had something in my pocket from at the end of the night.
3. Who WAS that band?
As mentioned above, I checked out a few bands last year for Free Week. I probably heard 10-15 bands in one evening. I was taking photos AND video. There were a few bands I shot that nobody knew who they were. If you don’t have a sign up letting people know who you are… or at least mention it a few times (or hand something out), how are they going to find you again?

4. Is playing “FREE WEEK” any different than the other free shows you do in town?
The ONLY difference is, there will be 15+ other free choices around you. Everyone is offering their talent for no charge. The question is….well.. #5.
5. How is your band going to stand out?
That’s more of a question for YOU. And you should think outside the box on this one. Here’s a few ideas:

a. Commission an artist to paint a piece of art during your set… and tell people that if they sign up to your mailing list, they have a chance to win a drawing to get to keep the artwork.
b. Give away your CD to everyone who wants it, and go by after the show and offer to autograph it, as an added bonus… or at least say hello and thanks.
c. Costumes. Funny hats. Something outlandish. WARNING, this only works if you have good music… or else you’ll be remembered as that crappy band in English soldier uniforms.
d. Be dynamic from stage. Treat the show like you’re trying to win something. You may be… winning a fan, or maybe a slot opening up for a larger band at that venue.

My FREE advice
(worth much more than it cost you)
So, if you are asking me, playing for no pay is acceptable, as long as you and your band mates have a plan for Return-On-Investment (ROI). Make sure that the time you put into the night… lugging equipment, paying for parking, time away from loved ones, practice time, drinks, etc… is either understood to be a loss, or you have figured out a way to come in even or ahead.
If you’ve read a few of my posts in this series, it should be no surprise when I say that you need to run your band like a business. It’s called the “MUSIC BUSINESS.” The clubs are your stores and your band is your product. You will not get very far if you keep giving away your product, but it’s a good idea to give folks a free sample now and again as long as you’re monitoring the ROI.
Personally, if I were in a band that played the bar scene, I would probably rail against Free Week, unless there was some kind of deal going on behind the scenes with a promoter that promised a bigger (and paying) gig for a positive performance. I’d actually want to play a gig with a cover charge that week… and out-promote and out-rock the freebie clubs.
I asked a few Facebook friends what they thought of playing for Free. My friend Jose Santacruz made a good point, which pretty much encompasses my thoughts as a whole.


“I think as musicians, we sell ourselves short and we let others do it as well. A freebie for charity, for a good cause, for a friend... sure,” he said. “But to go to a club and not get paid while you are keeping the bar full? I don't think so. Owners will make it seem like people will stay no matter what, but what a coincidence that they are staying while you are there too? You did not run them off and you should be paid.”

Another friend chimed in with this sad, but true nugget.


“Let's not forget most weeks in Austin are free weeks,” David Love said.

So, think about this bands playing Free Week: If there’s no ROI, you’re just feeding the bar some money and walking away with less money than you began with.
In a live music scene that is losing more clubs by the day, (the latest casualty is Momo’s Club on 12/27/11), is trying to pack clubs by offering the musicians up for free what will save it? Is that winning? I think not.
To paraphrase and misquote Trey Parker (all apologies to Team America)

“Free Week isn't free! No there's a hefty f’n fee.
And if you don't throw in your buck o'five who will?”

So, next time you go to a live music venue, pay the cover or if there isn’t, throw the band their buck o’five. They deserve it.
Happy New Year everyone. Hope your 2012 is amazing.