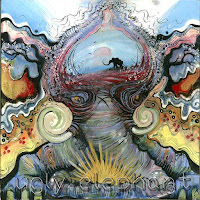 In 2008 a jazz-meets-funk instrumental band called Ugly Elephant formed after a conversation between musicians at Austin’s Eeyore’s Birthday Party. The five piece band has been playing around town at venues like Ruta Maya, Headhunters, and Red Eyed Fly. On Thursday August 5 they will be heading into their three-night at three-venue CD release party.
As I stated in an earlier review, I’m not really a jazz enthusiast. My knowledge of jazz is pretty much confined to The Cosby Show and the times I wander into the Elephant Room. That is to say, I enjoy the genre, but I’m not the guy who can pick apart a freestyle jam. I do appreciate the collective sound it produces. I’m a dabbler.
Ugly Elephant’s debut self titled CD is something I could truly get into. I’d call it “accessible jazz.” It’s more jam band music that happens when musicians who truly have an extreme knowledge of their instruments and craft get together and let loose.
The first track, “Africa” kicks in with a nice baseline before the wa-wa guitar and horn fills it out. “Dorkus Rex” features my favorite moment on this CD when it breaks the freeform jam to play about 30 seconds of a 1960s sock-hop groove. “Whole Lotta Nasty” features a killer guitar jam. The final track, “The Metal Song” comes in full force, but then pulls back into a flute and keyboard driven track that would make Ray Manzarek smile.
If you’re into fun free-form funk and jazz fusion you’ll dig Ugly Elephant.
Ugly Elephant is Dave “DJ” Johnson (drums), Chris Hart (guitar), Tim Girardot (keys), Austin Simmons (bass) and Mitch Quintanilla (saxophone)
You can catch them live four times in the next ten days.
The CD Release weekend bengins Thursday August 5 when at 10p they’ll have a listening party at Nomad (http://www.nomadbar.com), Friday they’ll play Headhunters and Saturday Ruta Maya is where they’ll be. And just announced is a special pre-release gig on Tuesday August 3 at The Long Center on the terrace from 7-10p. See and hear more on their MySpace Page.