“Everybody’s got something stuck in their ear / The God started talking and nobody could hear.” – See You Tonight 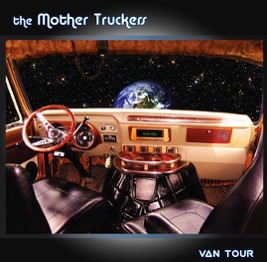 Any album that begins with an old-school sounding rocker celebrating the end of the world would fit into the category of interestingly different in my book. But then you add that it’s a release from the good-time blues and country-twinged dual-vocalist group The Mother Truckers and it all makes sense.
If you’re a fan of Austin music you’ve heard of these folks. They’ve been in town for the last five years (transplants from California) and in that time they’ve built quite the following. In fact their official fan club is called “Go Truck Yourself!) I first caught them at  Scholz Beer Garten in 2007 during a party hosted by Texas Music Magazine. Their live performance is as interesting as the fantastic lyrics and vocals of husband and wife team Teal Collins and Josh Zee. And while you can’t bottle a live show, they did a pretty good job of capturing the feeling on tape with Van Tour.
As mentioned, “Alien Girl” kicks Van Tour off with a bang. Collins’ sexy powerhouse vocals almost make you forget she’s talking about blowing up the world… well… at least she’s taking us with her.  They slow the rock down for “Keep It Simple,” which evokes a classic blues jam. A science lesson is given in “Size of the Sun.”  Speaking of sun, the fun-in-the-sun memories of California come out in “Summer of Love.” And anyone who’s been in a band will appreciate the tongue-in-cheek rocker “Van Tour”
The key to The Mother Trucker’s sound is the fantastic guitar playing of Zee. That, along with the backing of bassist (and Austin music veteran) Danny G and drums by Pete “The Beat” Langhans, make for a full sound.
My favorite track is “Break-Up Sex” where Zee comes on like a carnival barker bekoning Collins’ sultry singing.  “You know you make me crazy, and I know I make you crazy. But, you know I love you.” Incidentally, this song is part of an online poll if you’d like to hear and vote.
The album ends with a sweet little ditty called “Half The Time” which pretty much sums life up with the lyrics “Half the time I don’t know what I’m doing / and the other half I don’t care.”
If you’ve not heard The Mother Truckers yet, Van Tour is a nice introduction. I really recommend you catch them live. It was released in late June w/ a show at Antone’s but they play next in  Austin at Threadgills (301 W. Riverside) on July 31. For more information on The Mother Truckers, visit their Website - themothertruckers.com.

Wow.. the above comments aren't about The Mother Truckers at all, are they? Sometimes you "google" truckers and post random things.

Saw them at the Continental in Austin a few years ago...love the band, hope they'll tour Europe!