“Does life imitate art / or art imitate life / why are we like this / caught up in this strife.”
- “Voyeuristic” 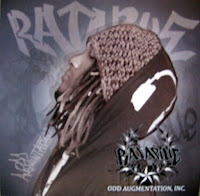 The 18 song album (15 + 3 bonus tracks) is chock full of great tracks. He tips his hat to Jimi Hedrix in “Jimi’s Warning,” talks about lost love in “Time Heals A Broken Heart,” and calls out someone with a girl who has “stink breath like Frodo Baggins” in the battle-rap “Opiates and Flatbeds.”

Yes, there are songs about making money (“Maintain Scrilla”), sex (“Mad Eps”), and fame (“Radio”) but they are done with complex lyrics layered with some impressive scratches, mostly by Austin’s DJ Trouble. Ratarue seems set on elevating hip-hop and Odd Augmentation, Inc is his calling card.

“800 Pound Gorilla” is a standout. It’s got a really nice acoustic guitar loop overlaid by drums and scratches. But, the lyrics are the most impressive. “Invigorating, elaborate, conscious is my approach / To put him in denial is to get your body broke.”

I also really dug “One Bite At A Time,” a track about making it in life. “The ego is an ugly troll that lives under a bridge between your heart and your mind. A rabbit’s foot is a sad substitute for horse’s sense. How to eat an elephant? One bite at a time.”

Odd Augmentation, Inc. was released on January 25 at an INsite Night in Austin. It can be found at Waterloo Records. If you’re a fan of hip-hop with meaning, you should pick this one up. For more information about Ratarue, visit his MySpace (http://www.myspace.com/ratarue), follow him on Twitter (http://twitter.com/ratarue) or subscribe to his blog (http://ratarue.blogspot.com).

Interesting trivia bit - Ratarue’s real name is Corey Powell. The moniker is a something his younger brother made up to use as a battle cry while they were growing up.