“I hear that train a'comin' down the line
She's carrying music and some old friends of mine.
And when they get here, we're a'gonna let loose

Gonna play about midnight, you can come if you choose.” – Don’t Do This To Me 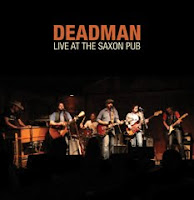 Deadman
Live At The Saxon Pub
Gonzolandia Records
It is no mistake that the Deadman CD Release celebration for their Live At The Saxon Pub this past August 20-22 was called a “revival,” as the band comes off like an alt-country choir with Steven Collins fronting the 6-piece praise band.
As the title suggests, this album was recorded while performing at Austin’s Saxon Pub, where the band seems to have a solid Tuesday night residency. The dozen Collins-penned tracks that are captured on this album are beautifully performed.
The songs contained within this release are a collection of tracks from previous albums 2001’s Cuatro Canciones  and Paramour, 2005’s Our Eternal Ghosts, and 2008’s Severe Mercy. It also includes a few tracks from the soon-to-be-released Take Up Your Mat And Walk.
Gospels like “If I Lay Down By The River” and “Mankind” play nicely with the whiskey-soaked lost love grooves of “Adios Mi Corazon” and “Ain’t No Music.” Meanwhile the storytelling of “Brother John” and “Oh Delilah” add another layer to the tunes.
My favorite song on this album is the ballad “When The Music’s Not Forgotten.” It hit me deeply in a personal way. You see, recently I went on a spiritual retreat called a “Walk To Emmaus” and I finally understood that is meant by God’s grace. So, the following lyrics really hit home. “If we stand on a hill and do not touch / How can we do good? / If we wash our hands of all our friends / What change can really come? / If we hide our fears and don't draw near / Have we really lived? / Or are we all just standing here / Hoping there is grace?” As a small bit of trivia, I learned this track was actually used on Seasons 1 and 3 of the hit  CBS show Criminal Minds.
I believe there was a little divine hand in the fact that this CD is my last one of my 52 Austin CD Reviews in 52 Weeks project. It really typifies the journey I’ve gone through personally, socially, and spiritually in these last 12 months. But putting me aside, Deadman Live At The Saxon Pub is a must-listen to music lovers of any kind.
The album is available for purchase at shows and online at Gonzolandia Records. They play Austin tonight 9/9 at the Continental Club, 9/14 at Saxon Pub and have an in-store at Waterloo Records on 9/21 at 5:00p and play a H.A.A.M. benefit shot at Saxon Pub that evening.
Also, there’s a free studio version of “Don’t Do This To Me” on the band’s Bandcamp. So… there’s many options for you to catch Deadman live or, for those who don’t happen to live within touring distance, online.